Ogliastra, a small region in Eastern Sardinia, with its immaculate beaches and its wild nature is considered by everyone a real paradise.
Located between the sea and the mountain, it is one of the best places to enjoy a holiday in total relaxation between beaches and excursions.
In the so-called land of centenarians you will be greeted by breathtaking landscapes where nature gave its contribution drawing monuments of unique nature that are so spectacular to leave people stunned.

Let’s start our tour. We will soon discover some of the monumental beauties of this wonderful land. 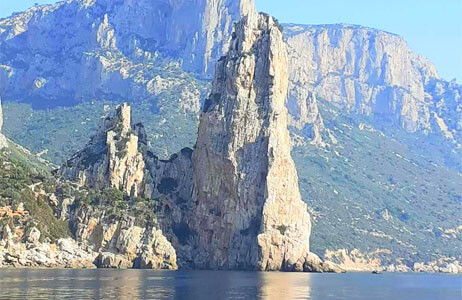 Pedra Longa, or Agugliastra, is a limestone pinnacle that stands up from the sea for 128 meters. At first glance it would look like a great size rock but in reality it is part of a mountain that collapsed from the surrounding cliff in ancient times.
This great rock was declared a natural monument in 1993. It marks the beginning of the spectacular and wild Coast of Baunei and is the right destination for trekking and climbing.
From Pedra Longa starts the “Selvaggio Blue”, a one week itinerary that will take you from Santa Maria Navarrese to Cala Gonone. One of the best and daunting trekking path in Italy.

How to reach Pedra Longa?

By boath
It is possible to rent a boat at the port of Arbatax and from there it will be easy to get to this wonderful location!

By walk
If instead you would rather visit it by land you could choose if getting there walking or by car. It is possible to get to “Pedra Longa” on foot from Santa Maria Navarrese (two hours walking), through a trail that is near the Bellavista Hostel, above the promontory which overlooks the marina. Santa Maria Navarrese can be reached from Bari Sardo in just 20 minutes.

By car
If instead you’d rather go by car to that beach, you shall drive heading towards Baunei. At the exit of the Orientale Sarda (Eastern Sardinian) highway at km 153, south of Baunei, you will find a road that, following a short uphill path (that will take you to the “Ùttolo” tavern), turns into a spectacular panoramic discent. In a few minutes you will reach Pedra Longa.

From the “Pedra Longa” (Long Rock) square, where are located the bar and restaurant having the same name that were built in the Seventies, a series of stone steps will take you a few meters north of the rocky peak and lead you to the sea. 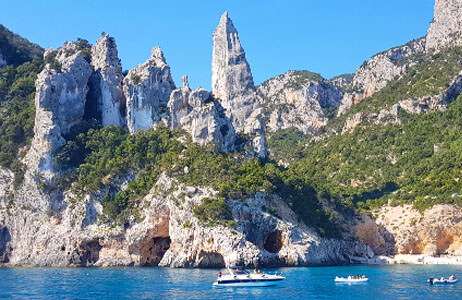 Along the coast of Baunei too you will be able to admire another natural monument of Ogliastra. This is the Arco di Goloritzè (Arch of Goloritzè), a rocky arch that extends towards the sea that since 1995 was classified as World Heritage of Unesco together with its wonderful “Cala Goloritzé” (Goloritzé Cove).
The erosing action of the sea has excavated in the rocky side south of the cove this wonderful rocky arch that delves into the sea. Such enchanting scenery is overseen by the magnificent limestone pinnacle that is 143 meters tall which is also loved by climbers from all over the world.

How to reach Goloritzè?

By walk
You will need to walk for about an hour. It is in fact prohibited to sail beyond the marking buoys!! Through the Supramonte of Baunei, the itinerary winds its way downhill for about an hour (and one hour and a half on the way back uphill) but it is quite easy and everyone can cover that.
From La Pineta Camping you shall go towards Tortolì but you shall not get into the village. Keep on heading towards Baunei and you will reach the supramonte where you will find all signs to continue on foot. In order to visit Cala Goloritze we would like to remind you that the access is subject to charge and that it is better to book it in order not to take a trip for nothing. 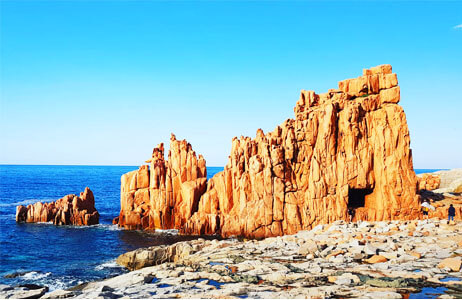 The “Rocce Rosse” (Red Rocks), also called “Cattedrale del Mare” (Sea Cathedral), are instead located at Arbatax, a small sea village located in the municipality of Tortolì.
Their name stems from the color of these rocks: red color.
This is granite porphyry that was shaped by weathering agents through the centuries. These rocks emerge from emerald green waters offering a spectacular color contrast. This particular type of rock gets mixed once in a while with black diorite, which emphasizes with its dark hues the artistic and aesthetic value.

How to reach Red Rocks?

By car
In order to visit the Scogli Rossi from La Pineta Camping you shall reach the small hamlet of Arbatax. From Bari Sardo drive towards Tortolì, once arrived there get to the harbour. These rocks are located right behind the harbour. 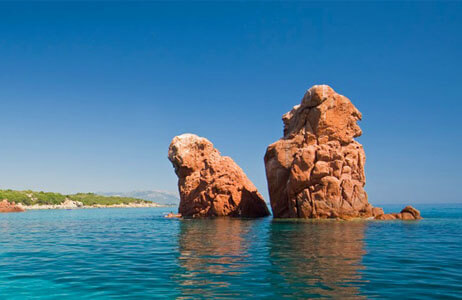 In the middle of the wonderful beach of Cea, 300 meters from shore, you will be able to admire another great wonder of nature: the ““Is Scoglius Arrubius”. Two sea stacks made of red porphyry that are about 20 meters tall.

How to reach Cea?

By car
Getting to the beach of Cea is quite easy. From La Pineta Camping you will be able to get to the bay by travelling for about 7,8 km by car (it will take about 18 minutes) passing through a series of bends that climb back towards the Teccu plateau.
Alternatively, you could use the SS 125 road towards Tortolì. From Bari Sardo you shall move in the direction of Tortolì and turn to the right soon as you will get at the crossroads for CEA. Following the signs, you will arrive at a wonderful beach, also suitable for families with children. 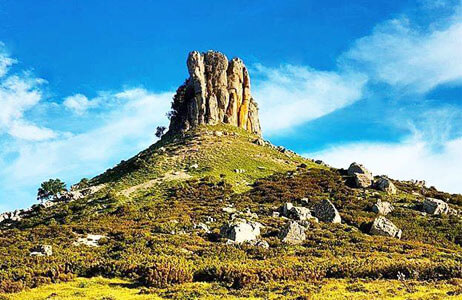 Perda ‘e liana is a natural monument consisting of a vertical tower, so called heel, running towards the sky. This is the tallest (1293 meters) among the many Ogliastra heels!
It is slender and elegant in its shape and is two kilometers away from the Tonneri plateau border. The tallest part of the heel is about fifty meters wide but there are vertical walls raising for 100 meters. The clear sides of its walls contrast with the grey color of the surrounding rocks. Its base is shaped as a truncated cone.
Perda ‘e Liana is located in a fascinating landscape and besides being a symbol of the mountain it is a very significant natural monument: it has the special feature that is visible across great distances.
Perda ‘e Liana is one of the most important and picturesque morphological conformations in Sardinia. Being 1293 m. tall, it is one of the most known natural monuments of the island due to its weird look.

How to reach Perda ‘e Liana?

By car
Getting to Perda Liana is easy. From the Camping you shall reach either the SS 389 Lanusei / Villagrande Strisaili road or Gairo Taquisara.
From SS 389 Lanusei / Villagrande Strisaili or from Gairo Taquisara you must reach the parking place at the mountain’s foot by walking (about thirty minutes). The path that starts from the parking area is well kept and in about twenty minutes you will get at the foot of the area that surrounds the bare limestone tower. 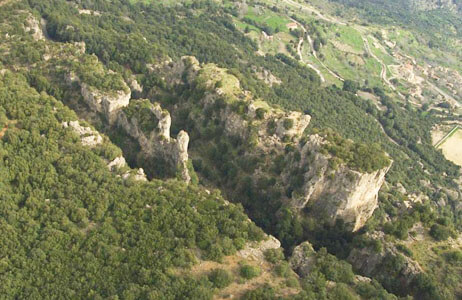 In the event that legend fascinates you we would like to suggest you to visit another extraordinary natural monument of this wonderful eastern Sardinia: Scala San Giorgio, a gorge that opens up in the rocks of Taccu di Osini, in the deep part of Ogliastra.
The legend says that Saint George, during a trip he made for his pastoral visit at Osini, when arrived at the foot of an unsurpassable mountain being tired from his travels, preached for a gap to open in order for his walk to be shorter and easier. His prayer resulted in the “sorgente de s’abba e sa santidade (holiness waters)” spring- that is today a place of pilgrimage – to reduce the wayfarers’ fatigue.
According to the legend this is how was born la Scala di San Giorgio (Saint George’s Ladder), which had been acknowledged as a natural monument in 1994. The gorge opens up 900 meters in altitude along the walls that define the eastern part of the wide limestone-dolomitic plateau of taccu di Osini overlooking the hamlet.

By car
Osini can be reached from La Pineta Camping travelling along the main road SS 125 (Orientale Sarda-Eastern Sardinia). You shall cross the villages of Jerzu and Ulassai, after that, you will reach Osini. Once arrived at the village you could head towards “Scala San Giorgio” following the signs. 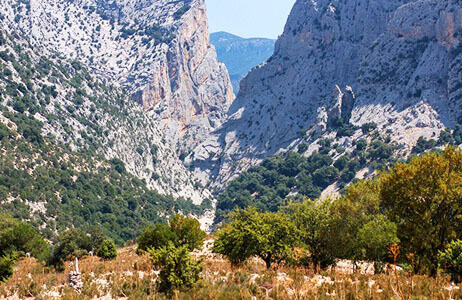 In the middle of Sardinia, between Barbagia and Ogliastra, you could visit the Gola Di Gorroppu (Gorge of Gorroppu): this is a deep gorge, about one kilometer and a half long, that has been shaped over time by the power of rio Flumineddu (brook) that flows at its bottom. The brook has eroded the limestone rock and created the canyon. You have reached the wildest area in Sardinia. For trekking you shall ask the help of experienced guides and use proper equipment.

How to reach Gorroppu?

By car
In order to reach the monument from La Pineta Camping you shall travel to Urzulei. Head in the direction of Tortolì, do not enter the village but keep going towards Lotzorai. When you get to Lotzorai you shall turn to the left at the Talana/Urzulei crossroad. In about 25 minutes you will get to the village of Urzulei. From there you shall head towards “Genna Silana” in the direction of Dorgali. The quickest access way is “Genna Silana” where you will find a wide parking area where you could park your car and begin your trekking using a signposted path (one hour to go and two hours to come back) toward this wonderful Canyon. 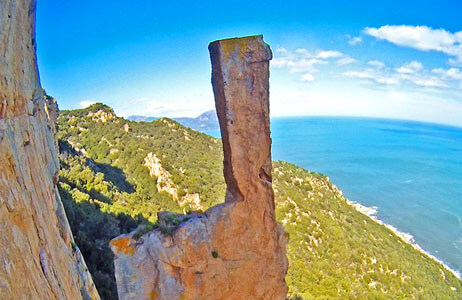 Last but not least we would like to let you know a monument that reminds us of the Jurassic. This area in fact has been called Sardinia’s Jurassic Park and the monument you will be able to admire is called Dillosauro: it is a granite cliff where it is possible to climb feeling many emotions and from which you will be able to enjoy a breathtaking view. It is located in the territory of Tertenia.

By car
For this excursion you shall use your car from Marina di Tertenia, until you will reach Loc. Santoru and keep on towards Torre Murtas where you will be able to park your car. The excursion will be along the coast for the most part, and then, in the latest more challenging part, climb up along a path that will take you to the final destination. You could reach a panoramic location on a pink granite rock overlooking a precipice about 80/100 mts on the sea (breathtaking view). The last part of this route is the most challenging one and the one with the greatest difference in level. Going across rocks that may be slippery and slick you will get at the base of the monolit. Take some water with you and use proper clothing, you will discover an enchanting place but it will be quite a hard trip. We recommend getting the help of an expert guide in order not to have any orientation problem since this area is very wild.

Ogliastra, a land rich in monuments!

Ogliastra is small but as you have been able to realize has great natural wonders. The monuments we have described here are just some of those that exist all over this territory. Spending holidays at Ogliastra does not just mean crystal clear sea but also nature, a nature that will leave you speechless. Our reception is ready to provide whichever piece of information and advice on the places to visit during your holidays at La Pineta Camping. Don’t waste this chance!